A Brief History
of Jazz at UCLA 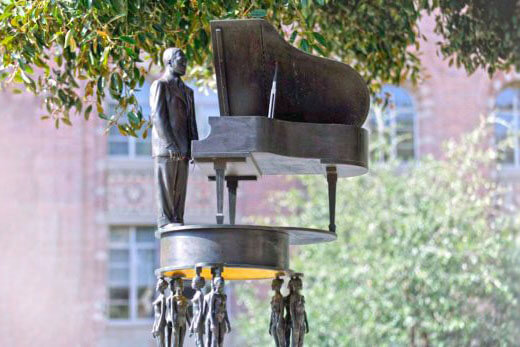 The Institute on Music in Contemporary Life, sponsored by the Department of Music in collaboration with The Musicians Congress, includes a panel on jazz, swing, and the popular song, with Artie Shaw, Calvin Jackson, and James Van Heusen.

Benny Carter performs in a concert at UCLA to mark the first anniversary of President Franklin D. Roosevelt’s death.

Benny Carter is among the musicians who participate in a special series of weekly lectures on the recording arts at UCLA.

Benny Carter conducts and solos with a large orchestra and choir in his own extended composition with lyrics in honor of the late Martin Luther King, Jr., at Pauley Pavilion, UCLA.

Gary Gray directs An Evening of Jazz, with the UCLA Jazz Quartet, as part of a program of Music in the Rotunda at Powell Library.

The Jazz Ensemble becomes an official part of the curriculum in the Music Department.

The Center for Afro-American Studies asks Kenny Burrell to teach a course on jazz.

Ellingtonia—the first college-level course on the work of Duke Ellington—is taught at UCLA for the first time.

Jazz Studies becomes a concentration within the departments of Music and Ethnomusicology.

The Department of Ethnomusicology becomes the single home for Jazz Studies.

The UCLA Herb Alpert School of Music announces the creation of an endowed chair in honor of Kenny Burrell – The Kenny Burrell Chair in Jazz Studies.