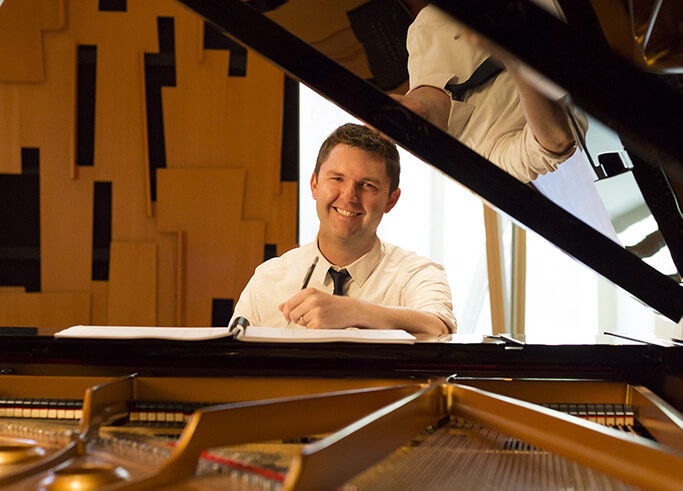 Please take a moment to share your professional achievements and milestones with us so we may have the opportunity to consider sharing the news with the UCLA community and beyond. If you’ve recently moved, or want to re-connect with UCLA, we want to hear from you! We’ll keep you up to date on events and other information about our school.

More News
More News
Jake Heggie '84, M.A. '05
Jake Heggie '84, M.A. '05
Jake Heggie is an American composer of opera, vocal, orchestral and chamber music. He is best known for his operas and art songs, as well as for his collaborations with internationally renowned performers and writers.
Kalil Wilson `06
Kalil Wilson `06
Kalil Wilson is a vocalist whose style crosses genres of jazz, R&B, pop, and even classical. He entered UCLA in the vocal and opera program before discovering his love of jazz.
Cristina Magaldi Ph.D. ’94
Cristina Magaldi Ph.D. ’94
Cristina Magaldi is a musicologist who specializes in the music of Latin America, Brazilian music, music and globalization, music and nationalism, popular music, and music and gender. 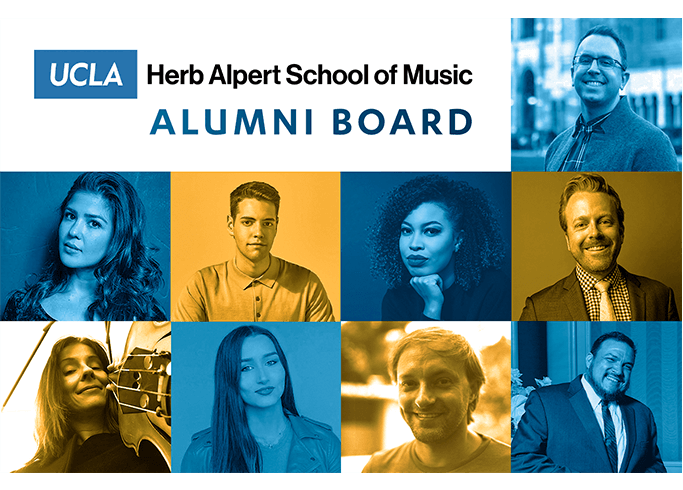 Meet the Alumni Board

The Inaugural Alumni Board is a passionate group of School of Music graduates representing a variety of musical disciplines and professions. Through engaging events, programming and special initiatives, the board connects our alumni community to each other and creates opportunities for current students to network with and learn from established alumni working in the music industry, as performers and in academia.

Classically trained composer Stephanie Economou M.A. ’14 is part of a new generation of female film composers. She took a master class from Harry Gregson-Williams, the British-born composer responsible for Shrek and X-Men Origins: Wolverine, during a seminar at the school of music. He subsequently offered Economou a part-time job, then hired her full time after she graduated. Economou has contributed additional music to Gregson-Williams’s scores including for the Oscar-nominated The Martian, Live By Night, and The Equalizer 2. In November 2018, Economou helped record a 60-piece orchestra performing the score for the Disney Nature film Penguin. “There’s nothing like being in the room with musicians,” she says, “because they’re the ones who breathe life into the music. We do our best approximations on the computer, but when we stand on the podium and hear all the musicians express their musicality — that’s what makes it all worthwhile.”

Soprano Angel Blue has performed in the great concert halls of Europe: La Scala in Milan, the Royal Albert Hall and the Theatre an der Wien. In October 2017, she made her Met debut in a production of La Bohème. Watch Angel’s “True Bruin” spirit shine in this video introducing kids to opera.

Are you a school of music alum?
We want to hear from you.
Keep in touch!