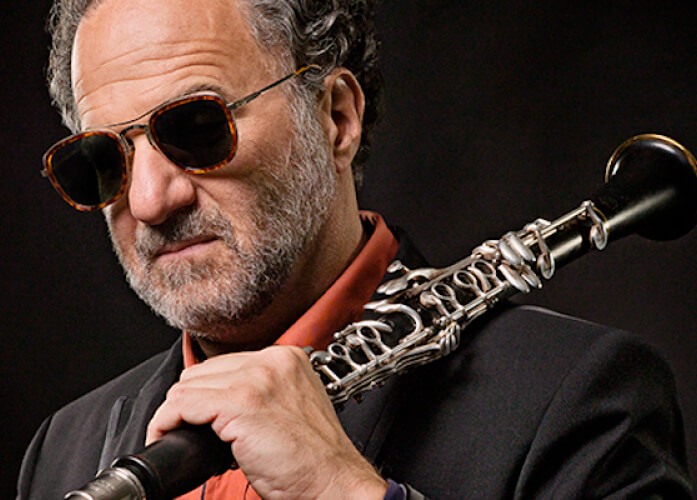 David Krakauer is widely considered one of the greatest clarinetists on the planet. Join us for this exciting Jewish Music Masterclass as Krakauer engages with attendees and shares the inspirations behind his compositions. With his own unique sound and approach, Krakauer has been praised internationally as a key innovator in modern klezmer as well as a major voice in classical music. His work has been recognized by major jazz publications around the world. His wide array of projects, solo appearances, and multi-genre collaborations include groups, composers and individual artists such as Ancestral Groove, the WDR Big Band, Abraham Inc. (co-led with Fred Wesley and Socalled) and many more.

Krakauer’s discography contains some of the most important clarinet recordings of recent decades. Among them are The Dreams and Prayers of Isaac the Blind (Osvaldo Golijov and the Kronos Quartet/Nonesuch), which received the Diapason D’Or in France, The Twelve Tribes (Label Bleu) which was designated album of the year in the jazz category for the Preis der Deutschen Schallplattenkritik, and Paul Moravec’s Pulitzer Prize-winning composition Tempest Fantasy (Naxos). He has also recorded with violinist Itzhak Perlman/The Klezmatics (Angel) and Dawn Upshaw/Osvaldo Golijov (Deutsche Grammophon). Other notable releases include his 2015 album Checkpoint with his band Ancestral Groove (Label Bleu), Paul Moravec’s Clarinet Concerto with The Boston Modern Orchestra Project (BMOP Sound), Klezmer NY (Tzadik), Tweet Tweet and Together We Stand with Abraham Inc. (Label Bleu) and (upcoming) Breath & Hammer on his own label, Table Pounding Records. His unique sound can be heard in Danny Elfman’s score for the Ang Lee film Taking Woodstock and throughout Sally Potter’s The Tango Lesson.

Krakauer is thrilled to be further expanding his creative boundaries by co-composing a number of works with Kathleen Tagg including a fantasy for concert band and a clarinet concerto for the Santa Rosa Symphony with conductor Francesco Lecce-Chong to be premiered in 2021. Also, the score for Minyan by filmmaker Eric Steel (which Krakauer & Tagg not only co-wrote but also performed and produced), is their first feature film project, which premiered at the 2020 Berlin Film Festival.