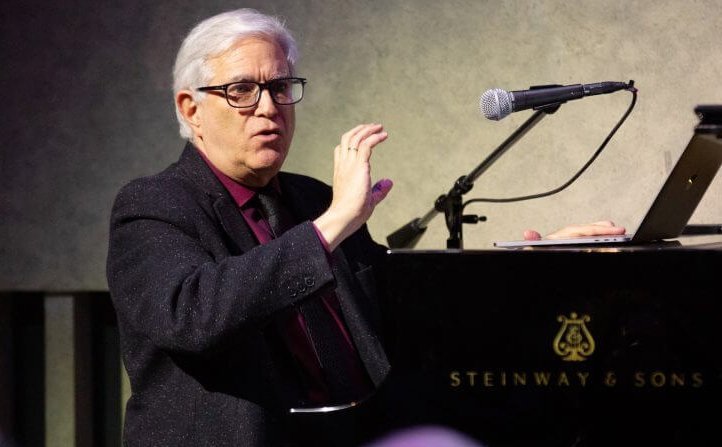 5PM PT | 8PM ET; Either Zoom or Livestreamed from Lani Hall and In-Person

Hugo Haas was a leading figure in Czech interwar theater and film.  Fleeing the Nazis in the late 1930's he ended up first as a character actor in Hollywood and then as the producer, writer and star in his own B-movie studio.  Hugo's films have usually been dismissed as mediocre, with some notable critical exceptions--Martin Scorses, for example, revered them, and as we know from our own historical moment, the notion of what is important can change quickly.  Whether one speaks in terms of their artistic value or not, Haas' films are buttressed by a series of secrets involving visual and sonic images of his dead brother Pavel, a brilliant composer and Janáček student who was murdered in Auschwitz, and the Holocaust itself, which for the most part goes unmentioned, even in those films where its existence is central.  This lecture looks at several scenes from Haas' films, Pickup, Girl on the Bridge and Strange Fascination where these hidden forces shape the action, posing challenges for us about just what it means to know or understand any artwork, and exploring the implication of moments that are fully intelligible to only one person.

Michael Beckerman is Carroll and Milton Petrie Chair and Collegiate Professor of Music at New York University and Chair of the Department of Music. He has written articles on such subjects as film scoring, music of the Roma (Gypsies), Mozart, Brahms, exiled composers, and music in the camps, as well as many studies and several books on Czech topics, including Dvořák and His World (Princeton University Press, 1993), Janáček as Theorist (Pendragon Press, 1994), New Worlds of Dvořák (W.W. Norton, 2003), Janáček and His World (Princeton, 2004), and Martinů’s Mysterious Accident (Pendragon, 2007) and Classical Music: Contemporary Perspectives and Challenges (Open Book Publishers, 2020). He has been a frequent contributor to The New York Times and was a regular guest on Live From Lincoln Center and other radio and television programs in the United States, Europe, and Japan. Dr. Beckerman lectures nationally and internationally and has organized many concerts and symposia. He was awarded the Janáček Medal by the Czech Ministry of Culture, is a recipient of the Dvořák Medal, and is also a Laureate of the Czech Music Council; he has twice received the Deems Taylor Award and in 2021 he received the Harrison Medal from the Society for Musicology in Ireland and the Gratias Agit award from the Czech government.  He served as chair of the New York University Department of Music previously from 2004–13, has an appointment as a Distinguished Professor of History at Lancaster University (2011–15),  and received an honorary doctorate from Palacký University in the Czech Republic in 2014.

This event is made possible by the Lowell Milken Center for Music of American Jewish Experience at The UCLA Herb Alpert School of Music with additional support from our co-sponsor UCLA | Alan D. Leve Center for Jewish Studies.

Like most of Lowell Milken Center’s music programs, this event is FREE! Register in advance for this event via the link below. After registering, you will receive a confirmation email containing information about joining the event.  Early arrival is recommended. Registrants receive priority up until 15 minutes before the event. Seating is on a first-come, first-seated basis.

Masks must be worn at all times, properly covering nose and mouth
ONE OF THE FOLLOWING + VALID PHOTO ID:
Proof of full vaccination against COVID 19 – This means two weeks since the final dose of the vaccine
-OR-
Proof of Negative COVID test no older than 72hrs
This test result must include: First & Last Name, Date of sample collection, Negative result
WHILE INSIDE THE VENUE:
Masks required to be worn at all times regardless of vaccination status
No Food or Drink allowed in the building.