Playing for Peace: Apple Hill String Quartet in a Masterclass and Round Table on Community Outreach 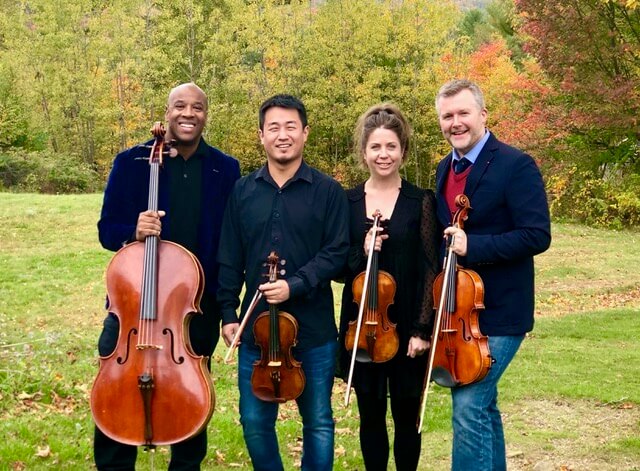 This virtual round table conversation is centered on Community Engagement and Outreach with the members of the Apple Hill String Quartet and its Executive Director Lenny Matczynski. The round table incorporates an active conversation with the students and faculty of the UCLA Herb Alpert School of Music and also includes a Chamber Music Masterclass featuring chamber groups from the UCLA Gluck Fellows Program.

Central to New Hampshire-based Apple Hill Center of Chamber Music is Playing for Peace, a philosophy of creating community and fostering artistic growth through chamber music. Playing for Peace was founded in 1988 to assemble musicians from areas in political conflict to play chamber music together. Over the span of 30 years, the program has grown to include many other communities that are underrepresented in classical music, separated by racial or ethnic discord, or experiencing inequality based on gender, orientation, religion, age, and playing level. The teaching philosophy focuses on the skills of chamber music–watching, listening, sensitivity, flexibility, and adjusting–the very same skills we all need to work and function effectively in the world.

Apple Hill's existing partnerships include embassies, universities, schools, conservatories, and youth orchestras in many countries, as well as organizations that reflect the racial and ethnic diversity of our U.S. communities such as Project STEP in Boston; Dallas Young Strings in Dallas, Texas; Community MusicWorks in Providence; the Juilliard MAPS program in New York City; Burncoat High School in Worcester; and schools in San Francisco, Los Angeles, Baltimore, Washington D.C., and Memphis.