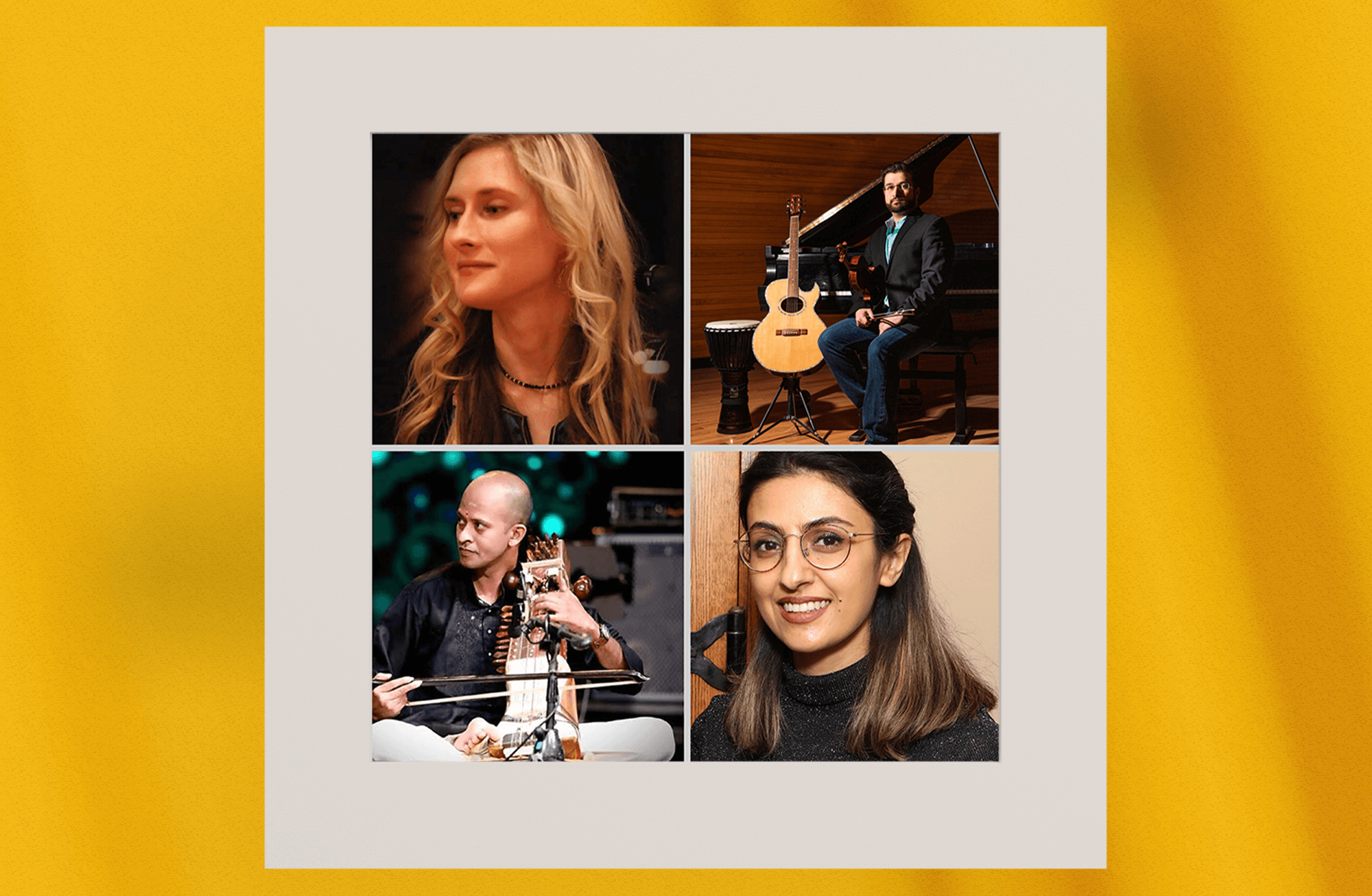 Registration link is at the bottom of the page.

The first event in the Indo-Persian Musical Confluence series features a panel that considers what musical modality reveals about transregional cultural connections across West, Central and South Asia. The panel is followed by a performance of Indo-Iranian music by Rahul Neuman and Naghme Sarang.

The panel, consisting of Taees Gheirati (UBC), Deepak Paramashivan (University of Alberta) and Behzad Namazi (Ohio University), examines these transregional cultural connections by comparing underlying modal structures, analyzing previously undiscussed descriptions of mode, and considering reflexive perspectives on mode from musicians across all three regions. By utilizing the transregional framework that musical modality provides as a primary category of analysis, this panel opens up new discussions on how to think about both historic and contemporary cross-cultural alignments in music that are clearly central to defining multiple music traditions in multiple places. This allows researchers to read specific concepts of musical modality as aspects of cultural production that relate to larger regional contexts.

Mutual influences between Iran and India in the pre- and post-Islamic era took root in beliefs, mythologies, musical practices, and other aspects of both cultures. In music, this impact can be seen not only in analogous aesthetics and sensibilities but also in the pedagogical systems and modal concepts. In this paper, I present the concept of mode and its similarities in Iranian and south Indian art music through a comparative analysis of one mode from each system. The analysis will demonstrate how Malahari raga (India) resembles Dastgah-e Chahargah (Iran) at two levels of formal and modal structure: Traditionally, the formal structure in presenting these two modes adhere to an ascending progression followed by a return to the first position as a brief cadence. Also, resembled functional notes and some melodic tendencies at cadences fill in for the differences in the intervals and affect the similarity of these two modes. This comparison is based on three versions of the non-metric exposition of each mode – avaz in Iranian music and alap in Indian music. In the procedure of representing these similarities, I also provide a table that compares Iranian and Indian modal terms. This paradigmatic analysis leads to a better understanding of this cross-cultural relationship. Moreover, it can illuminate the path to further improvements, especially in Iranian music pedagogy and improvisation techniques.

The current presentation sketches the historical impact and mutual interactions between the music the Middle-Eastern region and the Indian classical music. The music of the Indian and the Middle-eastern cultures can be studied in two stages: 1. Pre-Islamic music, and 2. Post-Islamic music. Islamic rule lasted for over six hundred years in India during which it decisively modified the trajectory of the future of Indian classical music, which was already at the cusp of transformation and ready for a complete metamorphosis. The main focus of the current work is to study the influence of music from the Middle East on North Indian classical music and the equivalence of the two in the Post-Islamic period, precisely, during the peak of Moghul rule in India. This paper analyzes 16th-century treatises on Indian classical music, namely Rāgamāla, Rāgamañjarī and Sadrāgacandrodaya of Paṇdarīka Viṭṭhala, who was a court musicologist under the royal patronage of the Moghul King, Akbar. The original Sanskrit verses from the Rāgaparivāroddeśaḥ chapter along with their translation will be discussed to expatiate upon how the maqāms, pardās and gūshās of Middle-eastern music namely Yemen, Dhannāsi, Ujjhāla, Bākarej influenced the rāgas of North Indian Classical music (Hindūstāni śāstrīya sangītaṃ). The equivalents of the rāgas mentioned in the treatises in the present-day performance practice, their counterparts in the Middle-eastern music system will be presented. The presentation will be supplemented with multimedia audio and video examples of live performances of the rāgas and maqāms.

The historic Silk Road, spanning the expanse of Eurasia, provides a landscape for cultural excavation and musical investigation. Over the many years of its existence, it has served as a venue for cultural exchange between the respective people groups which it connected. The focus of my research is to investigate the musical concept of mode in the traditional music of North India (raga) and Iran (dastgah). This transnational study serves to illuminate the interconnectedness of cultures along the Silk Road and to demonstrate cultural exchange through the lens of music. My research focuses on the music of the Ghazal ensemble, a Persian-Indian fusion ensemble featuring Kayhan Kalhor (kamancheh), Shujaat Husain Khan (sitar), and Sandeep Das (tabla). Ghazal ensemble’s album, The Rain, which features three modal improvisations, was nominated for a Grammy Award for Best Traditional World Music Album in 2004. Through music transcription and analysis, along with personal interviews, I explore the similarities and differences of modal concept within each of these two improvisatory musical systems. Within the scope of this study, I find it imperative to situate the concept of “mode” as a cross-cultural referent, in order to allow for a conceptual discussion of raga and dastgah. Harold Powers’ literature on the concept of mode, entitled “Mode: Middle East and Asia” will provide the necessary conceptual framework for my study. This research serves to contribute to the extant literature and scholarship in the field of ethnomusicology, as well as areal studies in Iranian and Indian studies, respectively.