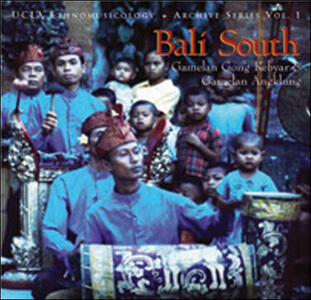 This compact disc contains recordings made in Bali in 1970 by Gertrude Rivers Robinson while she was a student in the UCLA ethnomusicology department. The first four items are from the repertoire of the gamelan gong kebyar of the village of Peliatan, and were originally released as a long-play record in 1973 by the UCLA Institute of Ethnomusicology with the title Bali South (IE Records IER-7503). The other five items, from the UCLA Ethnomusicology Archive, are released here for the first time and are examples of gamelan angklung from the village of Tunjuk.