An Evening with Shujaat Khan

We are pleased to present a special concert by celebrated sitar player Shujaat Khan. He will be joined by tabla players Gourisankar and Nitin Mitta for an evening of North Indian classical music. Shujaat Khan is here as a Dr. Mohinder Sambhi Visiting Artist.

Shujaat Husain Khan is one of the greatest North Indian classical musicians of his generation. He belongs to the Imdad Khan gharana of the sitar. His style of playing, known as the gayaki ang, imitates the range and subtleties of the human voice. Khan's musical pedigree extends seven generations and includes some of the leading artists of their own generations. He has earned distinction for his unique style of sitar playing, exceptional voice, and intuitive and spontaneous approach to rhythm. Khan has been invited as a visiting professor at the Dartington School of Music in England, the University of Washington in Seattle, and the University of California, Los Angeles. 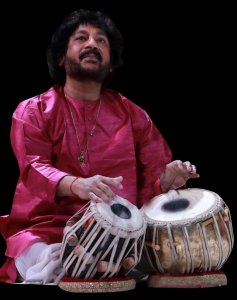 Gourisankar is a leading tabla maestro of the present generation. He is an A-grade artist of All India Radio and Television who has toured internationally for the last 30 years and has performed with numerous eminent musicians. In 2008, he established the School of Indian Percussion and Music in Austin, Texas. His playing styles reflect a unique combination of the Farukhabad, Punjab, and Delhi schools of tabla playing. He has accompanied eminent artists such as Pandit Hariprasad Chaurasia, Pandit Birju Maharaj, Pandit Jasraj, Pdt V.G. Jog, Pdt A.T. Kannan, Lakshmi Shankar, Ustad Shahid Parvez, Ustad Shujaat Khan, Pdt. Ronu Majumdar, Rahul Sharma, Rakesh Chaurasia, Ustad Nishat Khan, Pdt. Debashish Bhattacharya and many more. 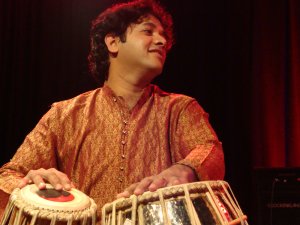 Nitin Mitta is a dynamic tabla soloist and a highly sought-after accompanist who has performed with some of India’s most celebrated musicians such as Pandit Jasraj, Ustad Amjad Ali Khan, Pandit Vishwa Mohan Bhatt, Ustad Shahid Parvez, and Ustad Nishat Khan, to name a few. He also made a mark as a versatile collaborator in other spheres when he joined forces with Grammy Nominee Pianist Vijay Iyer and electric guitarist R. Prasanna to produce a studio album titled Tirtha. Another collaboration with R. Prasanna can be heard on the soundtrack of the Oscar-winning documentary Smile Pinki. Mitta has also performed and toured extensively with two-time Juno (Canadian Grammy) award winner Kiran Ahluwalia.

This event is sponsored by The Mohindar Brar Sambhi Endowed Chair in Indian Music at The UCLA Herb Alpert School of Music and The UCLA Center for India and South Asia (CISA).

This event is FREE! Let us know you’ll be coming by RSVP. Early arrival is recommended.