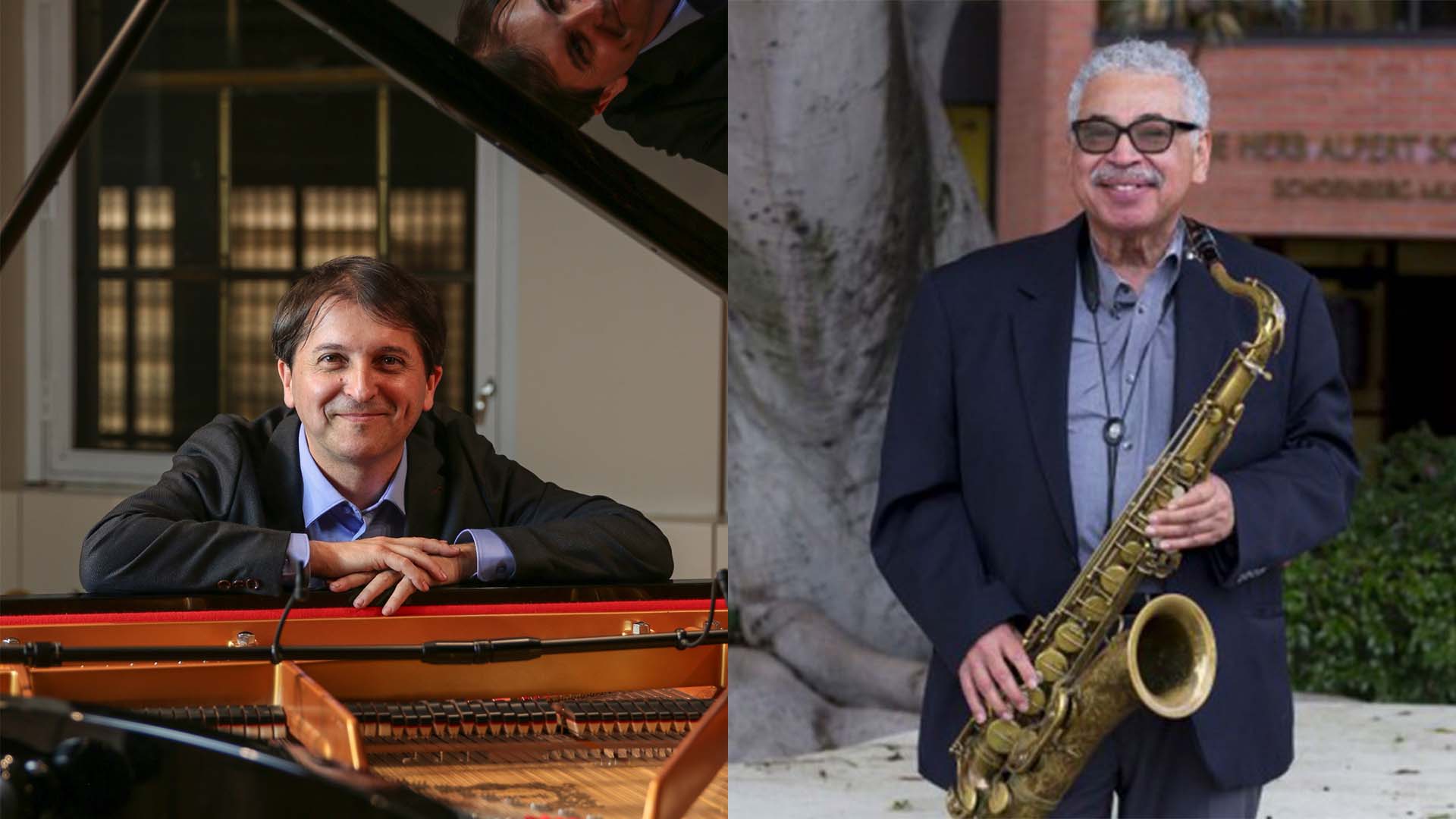 World-renowned UCLA Global Jazz Studies faculty Tamir Hendelman and Justo Almario perform music by Kenny Burrell as well as their original compositions. This concert is presented by Friends of Jazz at UCLA, and supported by the Ralph Ehrenpreis Memorial Performance Fund.

Pianist, composer, and arranger Tamir Hendelman is known for his imaginative and sensitive playing and arranging on his own trio recordings and those of the Jeff Hamilton Trio and the Clayton-Hamilton Jazz Orchestra since 2000-2001, as well as his work with Natalie Cole, Barbra Streisand, Roberta Gambarini, Graham Dechter, Richard Galliano, and Claudio Roditi. As a youth, he moved from Tel Aviv to Los Angeles, winning Yamaha’s national keyboard competition, performing in Japan and the Kennedy Center, attending Tanglewood in 1998, and receiving a bachelor of music composition from the Eastman School of Music in 1993. His interest In the intersection of jazz and classical music was nourished by early study with pianists/composers including Clare Fischer and Billy Childs. When Tamir Hendelman premiered John Clayton’s version of Oscar Peterson’s Canadiana Suite in 2001, Mr. Peterson wrote: “It was a satisfying but strange feeling... to hear a new young voice make some exhilarating and thoughtful solos in the spaces I used to occupy in those pieces…” Tamir Hendelman has performed with the Winston-Salem Symphony, Arizona MusicFest, and Pittsburgh Symphony Orchestras, and recently was one of several UCLA composers to be commissioned for pianist Inna Faliks’ Reimagine Project. He has been on the faculty of UCLA’s Herb Alpert School of Music since 2005 and has given numerous workshops in universities and music programs in the US and abroad. His latest CD, Destinations reached #1 in the US jazz charts. The album takes listeners along on a voyage of musical discovery, from originals to Jobim, Keith Jarrett, and Maurice Ravel. Other recent projects include Graham Dechter’s Minor Influence, Sharon Azrieli’s tribute to Michel Legrand, Secret Places and Jeff Hamilton Trio’s Catch Me If You Can.

A native of Colombia, reedman, clinician, composer, and arranger, Justo Almario has fused Latin, Afro-Cuban, South American, funk, and jazz genres into a style all his own. Almario studied at the prestigious Berklee School of Music before a stint with Mongo Santamaria as the band’s musical director. Almario has performed with Patrice Rushen’s Grammy Awards Orchestra, Freddie Hubbard, Roy Ayers, George Duke, Tito Puente, Machito, Dave Grusin, Ndugu Chancler, Alex Acuna, Abraham Laboriel, TOLU, Bebe Winans, Queen Latifah, Charles Mingus, Chaka Khan, Linda Rondstadt, Herb Alpert, Lorca Hart, Billy Higgins, “Jose Rizo’s Jazz on the Latin Side All-Stars,” and many others. Almario also has experience as an educator: he taught saxophone at Cal State Los Angeles from 2006–2008; he has taught in clinics throughout the United States, as well as in Sweden, Brazil, Columbia, Mexico, and Puerto Rico; he taught at the Henry Mancini Institute, has mentored youth during workshops at the World Stage in Los Angeles, and has taught students privately for over 20 years. In 1992, Almario was an integral part of the Newport Jazz Festival Tour, produced by George Wein. Two years later, four of the recordings on which Justo was featured earned Grammy nominations while Andrae Crouch’s “Mercy,” and Cachao’s “Master Sessions, Vol. 1,” were Grammy winners. Justo’s latest CD, “Love Thy Neighbor,” features his quartet playing original compositions as well as rare standards. A man for all seasons, Justo was the featured soloist with the Los Angeles Master Chorale at Walt Disney Hall’s season opener and also performed at the Christmas concert, “Celebrar,” at the same venue. Finally, Justo’s stellar career was recently celebrated during a segment of “World Stage Stories,” a comprehensive oral history series that chronicles the evolution of jazz.

Concert made possible by the Ralph Ehrenpreis Memorial Performance Fund.

ATTENDANCE / ENTRY REQUIREMENTS:
Masks must be worn at all times, properly covering nose and mouth

ONE OF THE FOLLOWING + VALID PHOTO ID:
Proof of full vaccination against COVID 19 – This means two weeks have passed since receiving the final dose of the vaccine
-OR-
Proof of Negative COVID test no older than 72hrs
This test result must include: First & Last Name, Date of sample collection, Negative result

WHILE INSIDE THE VENUE:
Masks required to be worn at all times regardless of vaccination status
No food or drink allowed in the building.

This event is FREE! Let us know you’ll be coming by RSVP. Early arrival is recommended.