Paul Robeson’s Voice and Other Giants 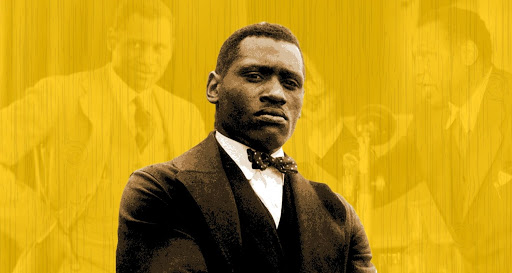 A Reading and Dialogue between Shana L. Redmond and Saul Williams moderated by Nashormeh Lindo.

UCLA musicologist and historian Shana L. Redmond presents a conversation with acclaimed spoken word artist and poet Saul Williams exploring the cultural resonance of Paul Robeson, arts legacies, and the political urgency of the present. Redmond presents readings from her recently published book Everything Man: The Form and Function of Paul Robeson and a selection of Robeson's works. Saul Williams joins in the conversation, reading and performing pieces from his long career as a globally-sighted artist.

Shana L. Redmond is an interdisciplinary scholar of music, race, and politics. Prior to receiving her combined Ph.D. in African American Studies and American Studies from Yale University, Redmond studied Music and African American Studies at Macalester College where she trained as a vocalist. Throughout her education and career, music has been at the center of her thinking—as subject, agent, and method—and activates her research and teaching interests in racial formation, political cultures, nationalism, labor, and decolonization. Her focus has been to understand the ways in which music is used as a strategy within the liberation politics and social movements of the African world. She is the author of Anthem: Social Movements and the Sound of Solidarity in the African Diaspora (NYU Press, 2014).

Saul Williams has been breaking ground since his debut album, Amethyst Rock Star, was released in 2001 and executive produced by Rick Rubin. After gaining global fame for his poetry and writings at the turn of the century, Williams has performed in over 30 countries and read in over 300 universities, with invitations that have spanned from the White House, the Sydney Opera House, Lincoln Center, The Louvre, The Getty Center, Queen Elizabeth Hall, to countless, villages, townships, community centers, and prisons across the world. The Newburgh, New York native gained a BA from Morehouse and an MFA from Tisch and has gone on to record with Nine Inch Nails and Allen Ginsburg, as well as countless film and television appearances. Most recently, Williams’ released his latest music works entitled, Encrypted & Vulnerable (July 2019), which acts as the score to his forthcoming directorial debut musical, Neptune Frost.

Praise for Redmond's Everything Man: The Form and Function of Paul Robeson 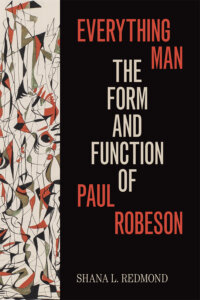 “Formally challenging and beautifully conceived, Everything Man is a model for scholarship and thinking as well as a powerful addition to the body of work on Paul Robeson, freedom movements, sound studies, music, and beyond. It will make a tremendous impact.” — Christina Sharpe, author of In the Wake"
Shana Redmond’s ingenious reframing of Paul Robeson as Afrofuturist media artist is but one quality marking Everything Man as a milestone contribution to Robeson scholarship. Redmond compels readers to reconsider Robeson as a radical modernist—one whose innovative embrace of electronic media technology (film, sound recording, telegraph) transforms our understanding of him from remote Black Communist icon to protean, creative contemporary. In lucid and evocative prose Redmond narrates how Robeson democratized sonic and visual modernity while engaged in anticapitalist justice work. Redmond illuminates the afterlife of Robeson’s voice and presence too—his appearances in postmodern art practices and the many places Robeson’s footpaths took Redmond where she discovered he was still revered by the far-flung descendants of the man's midcentury comrades and congregants.” — Greg Tate, author of Flyboy 2