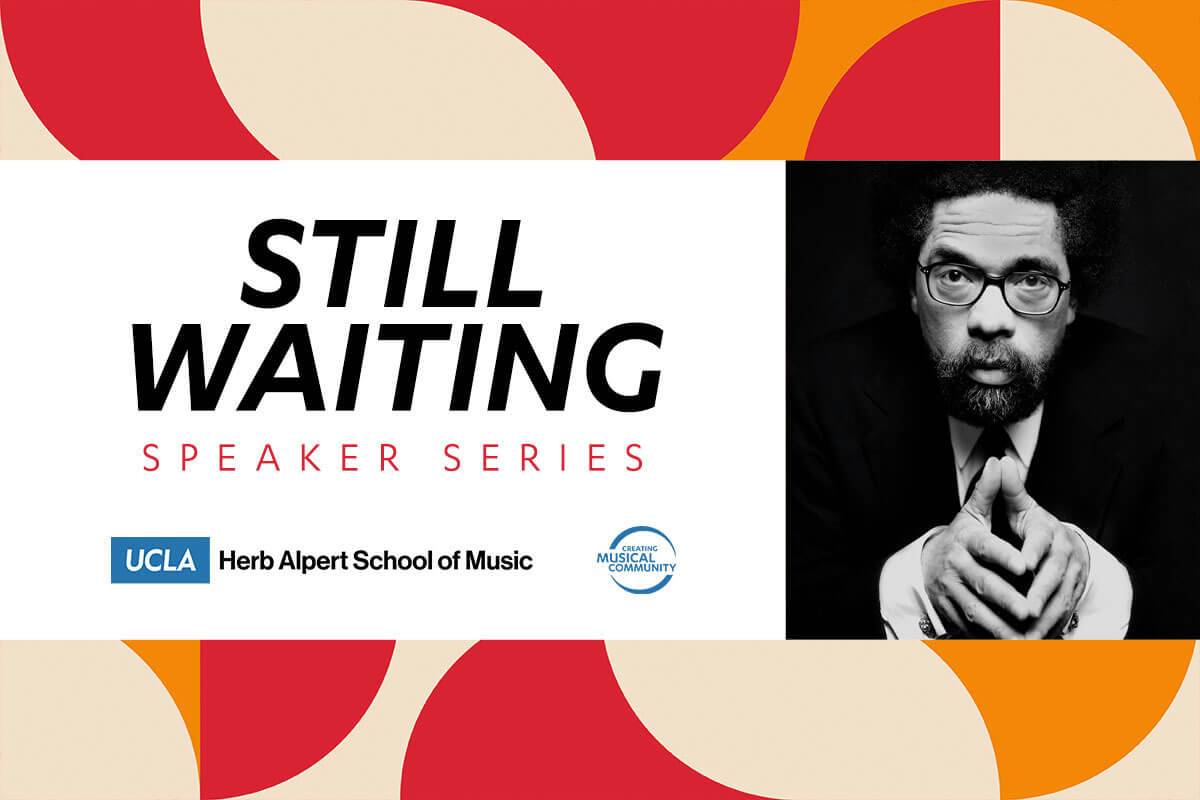 The UCLA Herb Alpert School of Music and its Inaugural Dean, Eileen L. Strempel are proud to launch Still Waiting, a new speaker series that invites the public to join UCLA students in conversation with prominent figures invited by the school’s Anti-Racism Committee (ARC), to help us understand ourselves and our response to this deeply hurtful moment in our nation’s racial reckoning. Still Waiting invites us to demand better of our communities and better of our actions in response to the tangible effects of racist policing, academic and institutional indifference, and methodologies that may bridge the gap between feelings of alienation and feelings of sanctuary and refuge for us all.

To kick off the series, the School of Music is proud to welcome prominent and provocative democratic intellectual, Cornel West in conversation with Arturo O'Farrill, Associate Dean for Equity, Diversity and Inclusion at The UCLA Herb Alpert School of Music.

Cornel West is Professor of the Practice of Public Philosophy at Harvard University and holds the title of Professor Emeritus at Princeton University. He has also taught at Union Theological Seminary, Yale, Harvard, and the University of Paris. Cornel West graduated Magna Cum Laude from Harvard in three years and obtained his M.A. and Ph.D. in Philosophy at Princeton. He has written 20 books and has edited 13. He is best known for his classics, Race Matters and Democracy Matters, and for his memoir, Brother West: Living and Loving Out Loud. His most recent book, Black Prophetic Fire, offers an unflinching look at nineteenth and twentieth-century African American leaders and their visionary legacies. Dr. West is a frequent guest on the Bill Maher Show, CNN, C-Span and Democracy Now. He made his film debut in the Matrix – and was the commentator (with Ken Wilbur) on the official trilogy released in 2004. He also has appeared in over 25 documentaries and films including Examined Life, Call & Response, Sidewalk and Stand. He has produced three spoken word albums including Never Forget, collaborating with Prince, Jill Scott, Andre 3000, Talib Kweli, KRS-One and the late Gerald Levert. His spoken word interludes are featured on productions by Terence Blanchard, The Cornel West Theory, Raheem DeVaughn, and Bootsy Collins. In short, Cornel West has a passion to communicate to a vast variety of publics in order to keep alive the legacy of Martin Luther King, Jr. – a legacy of telling the truth and bearing witness to love and justice.

ARC, the Anti-Racism Committee of The UCLA Herb Alpert School of Music, is a non-hierarchical group of students, staff, and faculty members committed to changing the atmosphere of our Bruin community by addressing issues of bias, marginalization and discrimination toward black, Indigenous and people of color and other intersectional communities.