It Takes a Village: Redefining Stereotypes and Creating Opportunity out of Necessity 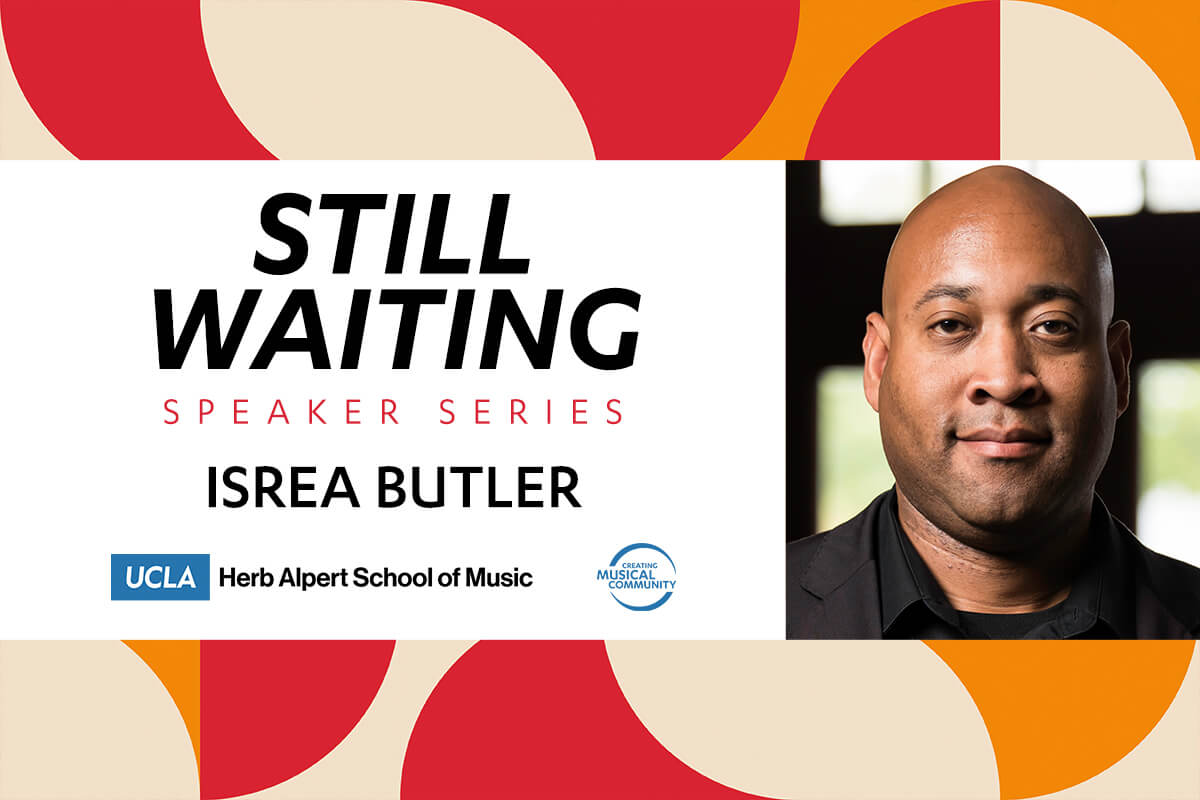 April 15, 2021 - Isrea Butler - "It Takes a Village: Redefining Stereotypes and Creating Opportunity out of Necessity"

The UCLA Herb Alpert School of Music is proud to welcome trombonist and conductor Isrea Butler, who is the Music Department Chair at North Carolina Central University and co-founder of the Gateways Brass Collective, a professional brass quintet dedicated to serving minority students that is sponsored by Conn-Selmer.

Isrea Butler joins the Still Waiting speaker series to share how musical communities have been created to nurture and support Black musicians, discussing the importance of organizations like Gateways, Colour of Music, Sphinx, and Chineke! that are creating spaces for black excellence in Classical Music. Dating as far back as 1910 with the Clef Club and 1919 the National Association of Negro Musicians, we have worked to overcome separate and unequal treatment to still succeed.

Isrea Butler holds degrees in trombone performance from the Eastman School of Music (BM and MM) and Rutgers University (DMA). His teachers include John Marcellus, Ralph Sauer, George Roberts, Tom Ervin, Michael Powell, Weston Sprott. In 2018, he co-founded the Gateways Brass Collective, which is a professional brass quintet dedicated to serving minority students that is sponsored by Conn-Selmer. He has played all four chairs in the world-famous Count Basie Orchestra and with many of the top jazz ensembles. In addition to orchestras and jazz ensembles, he has played trombone and tuba on eight NYC Broadway productions. He is the Music Department Chair at North Carolina Central University and Professor of Trombone. Before joining the faculty at NCCU he was the Director of Bands and music program coordinator at The University of Maryland Eastern Shore. Previous positions include Director of Jazz Studies and Low Brass at the University of Mary, and as Visiting Assistant Professor of Trombone at Jackson State University, where he taught trombone and conducted the University Brass Ensemble, led an award-winning Jazz Combo and taught Graduate Music History. He has also taught at the Eastman School of Music, Juilliard’s MAP and at Rutgers University. His students have gone on to perform, teach and study at graduate school at Indiana University, Berklee College of Music, UNI, Rutgers, Eastman School of Music, and Montclair.

As a conductor, Butler has been the conductor of the UMES Wind Ensemble, HBCU Trombone Choir, Mississippi Youth Symphony, Associate Conductor of the Brighton Symphony and Eastman Trombone Choir and Brass Guild. He studied conducting with Brad Lubman, William Weinert, Mark Scatterday and Kynan Johns. He has toured, recorded and performed with many of the country’s leading jazz orchestras including Cab Calloway, Count Basie, Duke Ellington, Lionel Hampton, Mingus Big Band, Glenn Miller, Birdland Big Band, and Jimmy Heath Orchestra. He is also comfortable playing classical music and has performed with the Orchestra of St. Luke’s, Rochester Philharmonic, Gateways Music Festival, Colour of Music Festival and the Buffalo Philharmonic. Butler is a Conn-Selmer clinician and performing artist.