Sounds of the Scene: Creating Musical Scores for Visual Content 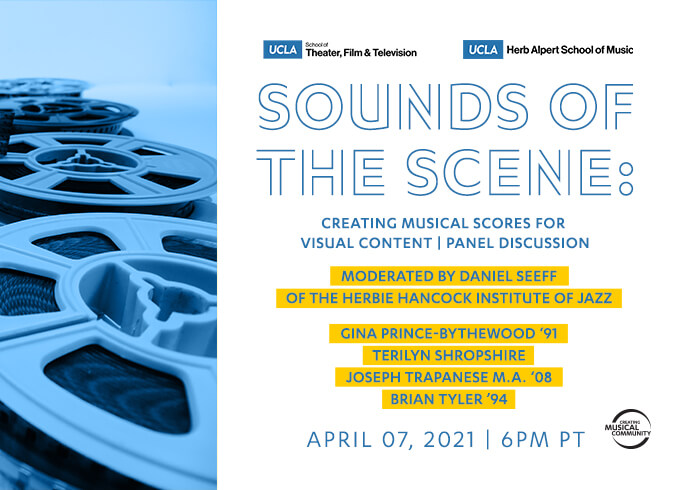 Sounds of the Scene Graphic
Online

Join the Herb Alpert School of Music in partnership with the School of Theater, Film and Television for this collaborative panel event that features composers and filmmakers including UCLA alumni. The discussion will explore the creative development and process of capturing scenic emotion and atmosphere for visual content.

For questions about this event, please email Rory O’Toole at rotoole@schoolofmusic.ucla.edu. 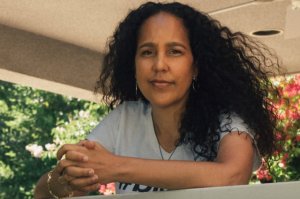 Award-winning director/writer/producer Gina Prince-Bythewood '91 is one of the most versatile storytellers working in film and television.  Known for her authentic character-driven work, she has directed and written such influential feature films as “Love & Basketball” and “Beyond The Lights.”   Most recently she directed the critically-acclaimed blockbuster ,“The Old Guard.”  Her next feature film will be directing the historical epic, “The Woman King” for TriStar Pictures, starring Viola Davis.   Upcoming for television, Prince-Bythewood will direct the first episode and serve as an Executive Producer of ABC’s limited series, “Women of the Movement.”   An advocate for equal representation in film and television on-screen and behind-the-scenes, Prince-Bythewood funds a scholarship for African American students in the film program at UCLA, her alma mater. 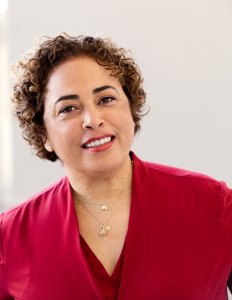 Terilyn A. Shropshire collaborates with the industry’s most talented feature filmmakers and television creators. Shropshire’s distinctive roster includes feature films such as “The Old Guard,” “Beyond the Lights,” “The Secret Life of Bees,” and “Love and Basketball,” directed by Gina Prince- Bythewood, as well as Kasi Lemmon’s films, “Eve’s Bayou,” “The Caveman’s Valentine,” “Talk to Me,” and “Black Nativity.” Notable work includes: “Miss Bala,” “Sparkle,” “Jumping the Broom,” “American Violet,” “Waist Deep,” “Diary of a Mad Black Woman,” and “Biker Boyz.” Shropshire's work crosses media platforms, contributing to the projects: “Between the World and Me,” “When They See Us,” “Marvel’s Cloak & Dagger,” “Shots Fired,” and “Quantico." 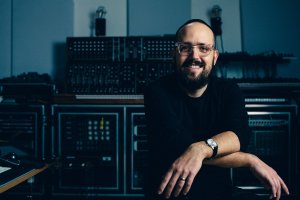 Joseph Trapanese MA '08 is best known for his sleek score work for blockbuster films like "Tron: Legacy", "Straight Outta Compton", "The Greatest Showman", "Oblivion" and the "Raid" series. His first major break came in 2010 when he worked with Daft Punk on the sweeping digital soundtrack to Disney's "Tron" reboot/sequel. Trapanese followed that success by creating a score with Mike Shinoda of Linkin Park for the American release of the 2011 Indonesian martial arts film "The Raid: Redemption". That same year, he helped with arrangements on a handful of tracks for M83's breakthrough hit Hurry Up, We're Dreaming, which led to the pair's collaboration on the 2013 Tom Cruise sci-fi epic Oblivion. For 2017's "The Greatest Showman", Trapanese worked alongside Pasek & Paul and John Debney, producing songs and co-composing the score. 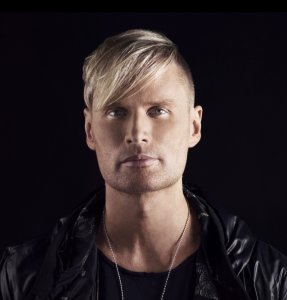 Brian Tyler '94 is a composer, conductor, and music producer of more than 80 films grossing over $13 billion worldwide making him the 9th highest grossing film composer of all-time. He’s also a platinum selling electronic music artist and producer and has begun preparations towards unveiling his ambitious new project Are We Dreaming, a completely immersive audiovisual experience. Tyler was named Film Composer of the Year at the 2014 Cue Awards and has composed scores for blockbuster movies such as “Avengers: Age of Ultron”, The Fast & Furious franchise, “Iron Man 3”, “Thor: The Dark World”, “Now You See Me”, The Expendables trilogy, and “Crazy Rich Asians” (voted to the 2019 Oscar shortlist for Best Original Score). He also scored “Eagle Eye” for producer Steven Spielberg, “The Mummy”, “The Greatest Game Ever Played”, “Power Rangers”, and “The Fate of the Furious” which at the time had the biggest global box office opening ever. 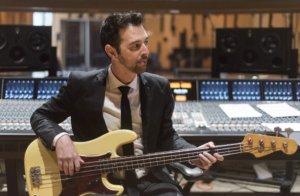 Daniel Seeff is the program director of the Herbie Hancock Institute of Jazz Performance at The UCLA Herb Alpert School of Music. He also directs the Institute’s Los Angeles public school outreach programming, including Jazz in the Classroom and BeBop to Hip-Hop, and serves as an associate producer of the Institute’s annual International Jazz Competition. Seeff coordinated the Institute’s summer jazz colony for six years and has produced dozens of Institute educational concerts in Los Angeles. He is the host and producer of the hip-hop and jazz radio show "ExcursionsRadio" on KJazz in Los Angeles. Seeff is also a bassist and guitarist who has toured internationally and performed on many major label albums with artists such as Eminem, Jay-Z, Drake, Kendrick Lamar, and Cypress Hill. He co-wrote and played bass on the number 6 Billboard hit song “The Man” by Aloe Blacc and wrote music for and played on Grammy-nominated albums by Anderson .Paak, Ledisi, and the soundtrack to the Oscar-winning animated feature film "Spider-Man: Into the Spider-Verse".